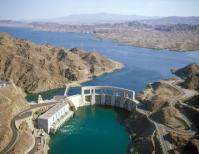 Since 1973, the District initiated a water-quality monitoring program involving chemical and physical constituents in the local domestic water supplies. The appearance of volatile organic compounds (VOCs) in many water wells in the District was first discovered in local water supply wells in 1979. Since approximately 80 percent of the annual water consumption in the San Gabriel Basin is supplied by groundwater, water purveyors have either removed those contaminated wells from service, blended contaminated water with water from other sources, or installed treatment systems to meet health standards and to protect public users.