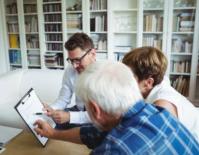 Fidelity Bank began in 1974 serving the metro Atlanta community and has since grown to serve communities throughout the Southeast.

Fidelity Bank was founded in 1974 and is owned by Fidelity Southern Corporation, one of the largest bank holding companies based in Atlanta with $4.5 Billion in assets and over 1,400 employees.

Through careful, deliberate management, and our belief in The Golden Rule we have grown to over 65 bank branches throughout metro Atlanta and Florida.