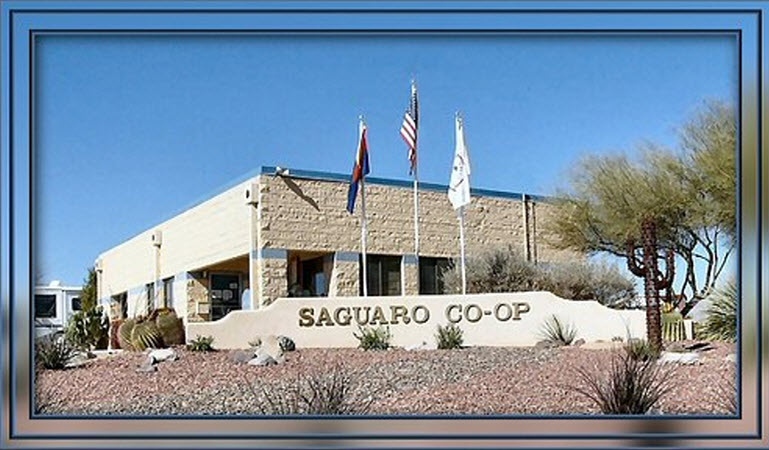 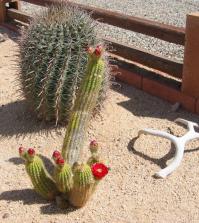 It was in May of 1988 at the newly formed Chapter 21 Rally in Ashfork, AZ, at Ole and Goldie's KOA that a thought of establishing another co-op in Arizona was initiated.

In June, 1988, the first board of the new Saguaro Co-op was elected as follows: Lester Welty, Judy Gramblin, Darol Baller, Bill Rendfeld, and Carol Bonniver.

During the November 15 to 17, 1988, rally at Picacho Peak, a land search committee was formed spearheaded by Don (Scotty) Creevy and Bill Rendfeld.

A very suitable 40 acres of land was found near Benson off highway 80. In March, 1989, the 40 acre parcel was put in escrow and the co-op was established. Another board election was held with the following members seated: Bill Rendfeld, Carol Fane, Henry Hunt, Don Creevy, and Ted Donomme. It was decided to have the basic construction of the park done by a professional contractor. This resulted in a park with 242 large RV lots.

September 8, 1989, saw the official ground breaking. While workers and heavy equipment turn the ground upside down, most of our prospective leaseholders had parked their rigs all around Benson.

Our social and information hours were held every afternoon in a nearby wash. On January 15, 1990, the lot drawing was held at the local meeting hall of the Presbyterian Church. Finally, just one day under six months from the start of construction, the Co-op Park was opened on March 7, 1990, for leaseholders to move in.

It did not take long for the first lots to be landscaped and sheds to be built. The official open house was held on December 8, 1990, with the Mayor of Benson and other dignitaries present. The ribbon cutting ceremony signified another milestone and the new beginning of our co-op.

Some other important developments were the road paving in April and May 1991; drilling of a second deep well in September and October 1991; construction of a maintenance building and erection of a large storage barn; the purchase of an additional twenty acres for park expansion and RV storage in January 1993; and a club house expansion completed in 1999.

We are proud of our achievements and thank everyone who made it the finest Co-op in the SKP system.