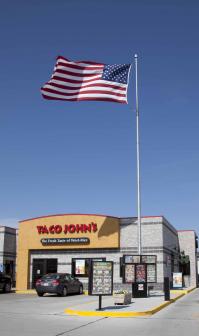 Since we opened our first taco stand, Taco John’s has been serving fast Mexican food in an original way. Between Meat & Potato Burritos, Potato Olés® and Taco Burgers, no one does Mexican like we do. Over the years, we’ve generated a cult-like fan base that can’t get enough of our signature flavors, fusing comfort food and south-of-the-border spice. Let’s be honest – we can’t blame them.

It all dates back to 1968 when a small taco stand opened in Cheyenne, Wyoming. With its bold spices and tasty tacos, it was an instant hit. Two local businessmen, Harold Holmes and James Woodson, purchased the franchise rights in 1969 and named the restaurant after the man who opened the first store – John.

The rest is history. Taco John’s restaurants began popping up across the Midwest, evolving to include drive-thrus, interior seating and bold originals like Potato Olés® and Nachos Navidad®. We even coined the original Taco Tuesday® value day, dedicated to big flavor for a small price.

Today Taco John’s operates and franchises more than 400 quick-service restaurants in 25 states, making it one of the largest Mexican quick service restaurant brands in America. We continue to grow across the country, but some things will never change: our uncompromising standards of food quality, dedication to using real ingredients and signature bold flavors.