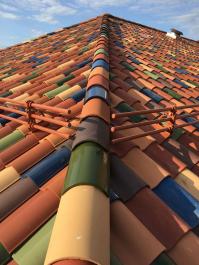 Before family-owned and operated Alpine SnowGuards and sister company, EcoFasten Solar were born, the company founder was a roofer who worked in the slate roofing industry as the owner of Vermont Slate and Copper Services (VSCS).

As VSCS grew, the company began seeking alternative business ventures in order to make the most of the expertise and capabilities that had been learned in the roofing industry. In 1998, VSCS began manufacturing snow guards on a full-time basis, and so too began the company known as Alpine SnowGuards.

Between late 2006 to early 2007, solar panel installers started calling to ask if Alpine SnowGuards' proven, watertight roof penetrations and flashings could also be used for installing rooftop solar arrays. EcoFasten Solar was born, and a line of solar roof mounts was presented to the solar industry in 2008.

In 2013, the two companies merged technologies and launched an all new product, Solar SnowMax, a snow management system designed specifically for use on solar panels. In late 2018, EcoFasten Solar was acquired by Esdec, the Netherland's largest mounting manufacturer.

At Alpine SnowGuards, we design, engineer and manufacture snow management solutions from our facility in Morrisville, Vermont. Our team is comprised of exceptionally talented individuals whose collective knowledge and technical aptitude greatly contribute to Alpine's success as a leader and authoritative voice in the industry.

Alpine SnowGuards takes pride in the fact that we value doing the right thing as opposed to the easy thing. We educate our customers so they purchase only the products they need, and we are honest with ourselves, our customers and our employees in order to foster a culture of idea-sharing, innovation and creativity.