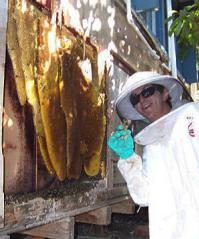 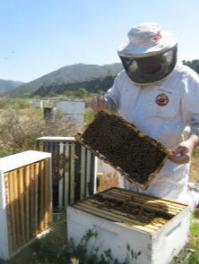 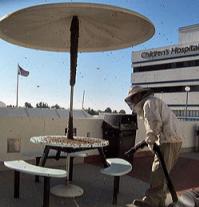 David Marder was eleven years-old when a swarm of bees landed in a tree in his neighbor’s yard. Having just seen a beekeeper on Sesame Street, David decided to catch the swarm himself. He ran into the garage and returned moments later with a gardening hoe, his dad’s motorcycle helmet, gardening gloves, and a windbreaker. He set a box on the ground, whacked the branch with the garden hoe, and lo and behold, the bees flew straight into the box. A passion was sparked.

for his 12th birthday, he received a bee book and some proper beekeeping equipment. Thus, Bee Busters was born.

David began beekeeping as a hobby and became an expert beekeeper at a young age. Before bee removal was a profession, David began helping his fellow Orange County residents and commercial enterprises by doing live removals – rescuing and hiving all of the bees.

In 1982, the name Bee Busters was coined. That year, David had more than 500 hives in Orange County. He continued to keep the bees and perform live bee removals throughout the county, building a large client base that included private homeowners, commercial organizations, and government entities.

David traveled extensively to study these amazing creatures that he had become so passionate about, including South America, Africa, and Asia. One of the more profound experiences during his travels was the opportunity to observe the “Africanized Bee” in South America before it migrated to the United States. He also took the opportunity to study Africanized Bees in their native African habitat.

When the Africanized Honeybees began moving into Southern California, the bee removal industry changed drastically. David captured his first swarm of Africanized Honeybees in the late 1990s. With this change on the horizon, David sought the expertise of Eric Mussen, PhD from UC Davis. Dr. Mussen told to David, “I don’t want you keeping these bees or giving them to beekeepers.” These were dangerous bees.

The temperamental Africanized bees began mixing with the local population of our native, docile European honeybees to form hybrids. With Southern California’s urban environment, it was clear that this was going to create a big problem. David participated in many studies, committees (including the Governor’s Steering Committee on Africanized Honeybees), and other educational programs to inform government agencies and other entities about safety and the appropriate ways of dealing with the problems to come. The Africanized Honeybee transformed the bee industry in Southern California, and public safety and liability became the foremost concerns.

Bee Busters has responded to countless ‘stinging incidents’ due to Africanized Honeybees and has bee featured in the news many times for solving such problems.

Today, Bee Busters, Inc. is dedicated to removing bees and other stinging insects such as wasps and yellow jackets in the safest way possible. David is still an avid beekeeper and keeps a couple of hundred domestic hives in the Southern California Area. Our bees visit the almond orchards for pollination services and produce honey for sale.

Our goal is to give you correct knowledge about your bee situation, so you are well informed about your situation. Visit our self-help guide or talk to one of our experts today to discuss your options for Southern California bee control or bee removals.

As professional beekeepers and a licensed structural pest control company specializing in bees and stinging insects, we know both sides of the bee business.

That’s why we are your Southern California bee control experts!

Many of our competitors are start-up companies whose technicians are new to the business. Many are unlicensed and using harsh chemicals that damage the bee population as a whole. Do you want these companies learning on your home?

Bee Busters has the expertise, experience, and proper credentials to utilize safe pesticides or to open your structure properly and safely. Be sure to hire a Southern California bee control company you can trust!