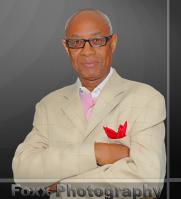 1968 Began a career in the Theatre Arts at the Senior Academy Of Drama in New York City and studied Acting, Voice and Dance at HB Studios. Foxx then made his acting debut at the New York Shakespeare Festival in “Kumaliza.”

1969 Became a member of the Family Repertory Company and later became the co-producer and company manager handling day to day operations which included: grant writing, tour bookings, contract negotiations, and scheduling the training programs. The company toured schools, colleges and theaters on the East coast.

Ian founded Foxx Follies Productions and produced “Red, White and Blues” a bicentennial statement in rhythm which he also wrote and directed. Production then appeared on local television shows and later toured Colleges, Auditoriums and Theatres on the West coast.

Produced and directed “Corner Boy” a television pilot based on the award winning book written by Herbert A. Simmons.

1982 Worked as an actor in television, film and commercials. Began producing products for television and film.

Also worked as a actor in films, television and commercials.

1995 Began working for Corner Boy Production as Executive in Charge of Production re-teaming with author/businessman Herbert A. Simmons to distribute “Corner Boy” for Home Entertainment.

Developed a network of over 150 stores and Businesses to circulate the film “Corner Boy” and Turnaround Newsmagazine.

2008 Wrote, produced and directed a short film “The Club” which is in development process to be converted into a feature film.