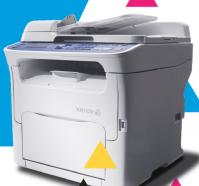 Benchmark Business Solutions was founded in 1994 with the goal of becoming the "vendor of choice" for document-related solutions in West Texas and Eastern New Mexico. Benchmark has grown to support an area that stretches across more than 100 counties in Texas, New Mexico, and Oklahoma.

Benchmark has been named the #1 Xerox sales agency in the nation six times over the past seven years.

In 2016, we were recognized as a third-time recipient of the U.S. Chamber of Commerce’s Blue Ribbon Dream Big Small Business of the Year Award. In 2014 we received Xerox's Managed Print Services Execution and Performance Award. In addition, we were honored with the State of Texas Small Business Award in 2013.