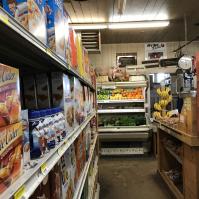 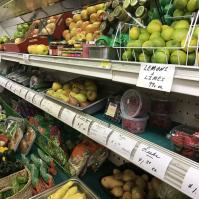 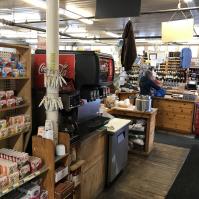 Established in 1918 as a company store for workers employed at the town lumber mill, Graeagle Store, (pronounced Gray Eagle, after Gray Eagle Creek) is celebrating its 100-year anniversary of serving locals and visitors alike.
Co-owners Steve & Nancy Harding and Dale & Gina Lambert work hard to provide the service and products demanded by today’s customers while preserving the historic qualities of this unique general store that continues to draw visitors back each year.
Today, the Graeagle Store offers a Full Service Fresh Meat Counter so you can have those steaks cut just the way you want for your family get together.
The store’s Fresh Produce Department offers a variety of fruits and vegetables with just the right ingredients to prepare that special salad or dessert.
The Fresh Dairy Department offers cheeses, yogurts, milk and other traditional dairy products.
If you are looking for tasty desserts, Graeagle Store has a wide selection of ice creams and other desserts as well as some great locally made pies and cakes to complete your family meal.
Whether you are looking to just refill the cooler or planning that big meal, the Graeagle Store has a little bit of everything to help you complete your list.
A Little History Behind the Store
Arthur Davies acquired what would become the town of Graeagle from the Sierra Iron Company in 1916 as part of a huge timber sale that stretched from Blairsden to Calpine.

He constructed a sawmill and began moving company housing from one of his other nearby mill operations in Sardine Valley, 45 miles to the southeast. Davies’ Mill (as it was known at the time) grew quickly, adding a company store, a post office (which resided within the store itself until 1980) a dairy and various other buildings.

The town held a naming contest to select a better name than "Davies' Mill.” The winning entry contracted "Grey Eagle Creek" to Graeagle.
Arthur sold the mill complex to the California Fruit Exchange of Sacramento in 1918. CFE used the lumber facilities to manufacture “shook” (wooden slats for fruit boxes) for the fruit industry in the Sacramento valley.
Family homes began popping up along Graeagle’s main street in the 1920’s. The community saw economic growth through the 1930’s and 1940’s, adding a hardware store, a butcher shop, a slaughterhouse and other commerce.
The Graeagle Store continued to supply the town’s bulk commodities through the 1950’s. Like other buildings in town, it had a wood burning stove in the early days. The pot-bellied stove was eventually replaced with a propane heater which freed up more space for groceries. (You can still see the plate above the butcher counter where the stove pipe once was.)
In October 1956, as cardboard quickly replaced the need for wooden fruit boxes, the Graeagle Lumber Mill shut down, and the milling equipment was auctioned off. By 1957, Graeagle had become a virtual ghost town. Most families vacated company-owned homes, and sought jobs and lives elsewhere.
Harvey West, Sr., a large timber operator in Placer County, had a vision and purchased what was left of the CFE’s remaining holdings a year later. Harvey would begin developing a master plan for the community of Graeagle.
By the 1960’s, the area was starting to see an influx in visitors as highways in the northwest improved. Harvey West, Jr.  and his wife Shirley soon moved to Graeagle and established the Graeagle Land and Water Company to manage a slow-growth plan for the community.
Graeagle Land & Water began construction on an 18-hole, championship golf course over the next several years, and kept sales of Graeagle homesites to no more than 40 lots per year.
Steve Harding, Sr. was in the area on a golfing junket with his good friend George McClaskey in 1968 and fell in love with the area. Steve learned the store lease would become available, and purchased the lease for the business in 1970. There were only about 200 permanent residents in Graeagle at the time, which made for slow business. Steve Sr. worked seven days a week with one other employee during most of the year, and hired two youngsters to help in the summer months.
Steve Harding, Jr. was teaching high school in Chester, and later middle school in Oroville, at the time. He and his wife moved to Graeagle and joined his father at the Graeagle Store to help run the family business.
“I remember having a choice of only 3 cereals at the time: Cheerios, Wheaties or Corn Flakes,” says Steve, Jr. “Bread came up the Canyon and over from Reno once a week. The chips rack was six feet by six feet, and there were three distributers crammed in that space: Laura Scudders, Frito Lay and Granny Goose. Now we have 18 feet of chips!”
The store’s business continued to grow as the community flourished in the 1980’s and 1990’s. In 1980, Steve, Jr. asked Harvey, Jr. if the post office could be moved out of its home within the store to another location to make room for more groceries. Harvey, Jr. relocated it to the present day “Buckaroo Chocolates” and then later to its current location adjacent the Graeagle fire hall.
Dale Lambert joined the Graeagle Store in 2000 and became a butcher. “I bought the butcher shop from Paul Trapp and became Steve’s partner. Paul taught me how to cut meat while I was still cutting logs for the Graeagle Timber Company. Those were some long days, but it was worth it. I still like working here and hope we can keep it pretty much like it is.”
For more information on the history of Graeagle, please visit http://www.graeagleassociates.com/area-info/the-history-of-graeagle/.
Search Tags: Graeagle, CA, grocery,groceries, produce, dairy, butcher, plumas county,,