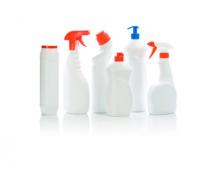 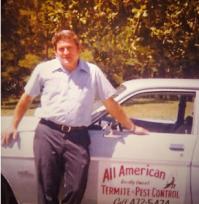 All American Termite & Pest Control Inc. is a locally owned and operated company that has been serving all of Southeast Iowa since 1971.

Our company provides pest control for a variety of insects including spiders, roaches, bed bugs, fleas and ants as well as rodent and bird control services. We also offer termite and wood destroying insect control and real estate inspections.  All American is an authorized dealer of the Sentricon Termite Colony Elimination System.

Whether it is a residential, commercial or farm property we can help you with all of your pest control needs.

Phil Laux Sr. was born and raised in the Sigourney area. He married Mary Hart in 1956 and shortly thereafter moved to Monmouth Illinois, where he worked for the railroad and also for a pest control company in the area.

In 1971 he and Mary moved back to Iowa, settling in Fairfield with their six children and starting his own company, All American Termite & Pest Control Inc. A few years later he purchased another company in Ottumwa – Atomic Pest Control – then in 1976 sold the company to Tom Conley, a buddy he had worked with on the railroad.

As All American continued to grow, Phil offered a partnership to yet another friend, Gordon Bryan, and they ran the company together until 1993. Phil and Gordon were very successful and grew the service area from a couple of counties to most of Southeast Iowa.

In 1994 Phil and Gordon retired and sold the business to Phil’s 3 sons, Dennis, Phil, & Mike along with his son-in-law Larry Gevock. At that time the sons also purchased Atomic Pest Control back from Tom & Shirley Conley, as they took their own retirement.

It is these rich, family-based, Iowa roots which make All American & Atomic your natural choice for local, reliable pest control. We thank you for the opportunity to serve you.