We broadcast around the clock 24 hours a day with Contemporary Christian music and positive programming as well as news, sports, and weather. 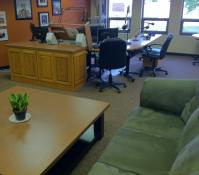 Our story is actually another success story from God. In 2002, a group of three Christian men were inspired and called by God to form a non-profit foundation in order to seek out the possibility & feasibility of establishing a localized Christian radio station emphasizing LOCAL churches and LOCAL Christian events while playing a much bigger variety of Christian music and devotional programs. It was a long 7-year initial journey for the Real Life Radio Foundation, crossing many hurdles and jumping through several hoops with the IRS and the Federal Communications Commission along the way.

We received FCC approval and a Construction Permit for our initial FM signal on September 26, 2008.  We began by initially just streaming the radio station over the internet in March of 2009 while we completed the station construction buildout.  This also gave potential listeners an idea of what to expect whenever we finally reached the airwaves.  We first signed on-the-air at 90.9 FM on Father's Day, June 21, 2009 and the radio ministry of 90.9 The Vine was born.  We have been broadcasting continuously around-the-clock since that day.

Along the journey, we've learned a lot about patience and we've really come to appreciate and stand in awe at God's incredible timing. It's easy to see that the hand of God has certainly been on this project all along, it is his success story. He opened many doors and provided an FM frequency at 90.9 and a miracle tower we leased with favorable terms in an ideal location near Wayne City, Illinois to initially get us on-the-air at 4,500 watts. Our name, "90.9 The Vine" is inspired from two bible verses in the 15th chapter of John.

We believe that the radio station is God's Vine to "branch out" and reach people in a positive way throughout the 8-county area we will serve.  We strive to strengthen the faith of current believers while leading non-Christians into a personal relationship with Jesus Christ.  Amazingly, 90.9 The Vine has become the first Christian Radio Station in the United States to be called "The Vine," which we filed a trademark to protect.

To carry out the Great Commission using Christian radio and internet streaming to strengthen the faith of current believers, while leading lost people into a personal relationship with Jesus Christ.  We are not ashamed of the Gospel, and we are not afraid to call our ourselves a Christian Radio Station.  We pray that our words, conduct, music, and devotional programming will always reflect Jesus, to impact lives and encourage people throughout southern Illinois in a powerful and meaningful way.  We hope that you will tell everyone you know about 90.9 The Vine.