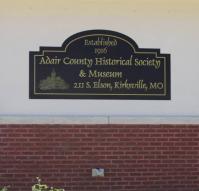 Tradition says Adair County's first courts met in a schoolhouse two miles south of Kirksville.  The first courthouse, which cost $1,000, dates from 1843.  It was a low, one-story, brick temporary building, located on a lot across the street from the square.  John B. Earhart was the builder, and John D. Callison, a carpenter.  Caleb Barnett was superintendent.  The first court held there met July 3, 1843.

The Square was reserved for the permanent court-house.  The court ordered the first permanent building in February 1852 and initially appropriated $2,200.  William H. Parcells was appointed

the superintendent and was sent to Knox County, just east of Adair County, to get the plan for its recently completed building at Edina.  Adair County then adapted the foursquare design and built it on the public square.  On March 8, 1852, the contract was awarded to Galyon and Douglass, who completed the work in 1853.  The first floor contained offices: a few additional rooms and the courtroom were on the second floor.

Fire destroyed this courthouse April 12, 1865, and the county remained without a courthouse for 30 years.  For many of these years, the public square was known as the "Park."  An illustration from the Atlas of 1876 shows a portion of the square filled with a geometric pattern of trees. The third and present Adair County courthouse dates from the turn of the century.