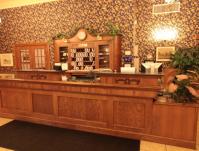 The Island House Hotel was originally built a short 58 years after the war of 1812 where Commodore Perry had a decisive victory over the Royal British Naval fleet securing the passage of Lake Erie. From our doorstep, you can clearly see the chain of Lake Erie islands where the battle took place.

Originally built in 1870, The Island House succumbed to a devastating fire that consumed the all-wood structure in 1882. The current structure was commissioned by Conrad Gernhard, Sheriff of Ottawa County, to replace the Old Island House Hotel in 1886. The Sheriff funded the construction of the gorgeous hotel utilizing money collected by the interest and penalties on delinquent taxes. The original cost of construction was $25,000 which by 2010 standards is the equivalent of $600,000.

At the grand opening when the thick wooden doors swung open, The Island House featured 50 lavish rooms and only one bathroom. It was the talk of the town. As one local paper wrote, "the House was equipped with every modern convenience pertaining to the travelling public."

As part of his construction plan, Gernhard ensured that the Island House would boost the area's finest restaurant and drinking saloon. As the story goes the good Sheriff left his mark permanently on the Island House when after a night of drinking and cavorting, he fired his pistol in the air leaving a bullet hole in the ceiling which remains to this day. As the premier hotel and restaurant in the area, The Island House became a popular hunting and fishing lodge for local and travellers alike. In fact, The Island House was a common stopping point for professional sports teams travelling to and from games.