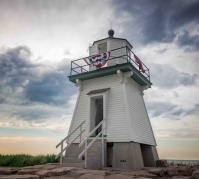 The city of Port Clinton has had an intimate connection with Lake Erie since it was first laid out in 1828. Located at the mouth of the Portage River, it was a shipbuilding port, thriving commercial fishing center, and home for many years to the famous Matthews Boat Company. Nowhere is Port Clinton’s rich maritime heritage more evident than in its unique lighthouses, the first constructed in 1833 to guide ships into the harbor. (See box at left—hopefully, I have a picture available.)

The lighthouse currently being restored is Port Clinton’s second. Constructed in 1896 at the end of the city’s West Pier at the Portage River entrance, the twenty-six-foot structure remained active for more than thirty years. The first keeper was Robert Waterfield, who had been the last keeper of the old stone lighthouse. This new light, housed atop a 12’ x 12’ square sided pyramidal wooden structure, consisted of a 180- degree, curved, clear glass lens with horizontal ridges. A single kerosene lantern with a ruby chimney provided a steady red light visible for six miles. The intensity was doubled to 100 candlepower some years later.