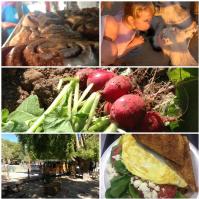 Ray and Thora Schnepf moved to the desert community of what was then, Rittenhouse. The Schnepf’s joined other notable farmers to begin clearing the brush to prepare it for row crops. The farmers soon realized the sandy soil in this area was perfect for crops such as cotton, wheat and vegetables. In the late 60′s, Ray Schnepf began growing Potatoes used for potato chips. The Schnepf’s continued to diversify in the 70′s planting Queen Palms, Mexican fan palms and pine trees in a large field. Before long the Schnepf’s were farming over 5000 acres and shipping vegetables across the country. But his favorite crop was candy corn. As visitors drove out to the small farming community they would often stop and ask if they could pick a few ears of corn and some peaches. It wasn’t long until Ray realized that selling corn and peaches for U-Pick was the way to go. And Schnepf Farms began to grow….

The town was known as Rittenhouse, was not incorporated. Fearing their small farming community would be swallowed up by nearby Gilbert,  Mark Schnepf and four friends began the process of incorporating. 1989 it was official, Rittenhouse became the Town of Queen Creek and Mark Schnepf served as the Town’s first Mayor to all 3500 people. He served as Mayor for 11 years.