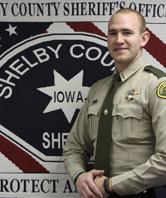 In 1851 the General Assembly of Iowa fixed the boundaries of Shelby County. The new county was named after General Isaac Shelby, who was famous for serving in the Revolutionary War, the War of 1812, and becoming the first governor of the State of Kentucky.

Early settling in Shelby County began in 1848 in Galland’s Grove. For more information about Shelby County and Its Courthouses, click here.

The cornerstone of the Shelby County Courthouse was laid in August 1892, officially kicking off the $63,000 construction project in downtown Harlan, Iowa.

A 20-foot-tall was originally present in the center of the courthouse, which was officially dedicated in 1893. Following the removal of the clock tower in 1899, the courthouse remained largely unchanged for nearly 80 years.

In 1978, an elevator was installed as part of a major interior renovation. The courthouse is one of 40 in Iowa built before 1900.