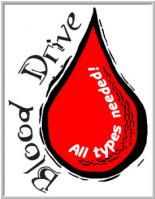 On January 13, 1974 the Grand Forks Herald proclaimed, “City Blood Bank to be Organized!” That March, the Dak-Minn Blood Bank opened its doors to volunteer donors in the X-ray waiting room of St. Michael’s Hospital. The advantages of being self-sufficient, along with increased usage in the hospital and mounting transportation costs spurred the decision to organize a hospital-based blood center.

The Blood Bank began recruiting donors from a Sertoma Club’s membership list and the donor database consisted of a shoe box of notecards. The hospital had an abundance of diapers that year, so donors, whom the Blood Bank lovingly nicknamed “expectant fathers”, were given a box of Pampers with each donation.

Since then, the Dak-Minn Blood Bank has grown and evolved as it moved from St. Mike’s unit of United Hospital near UND to the current Altru Hospital location. But one thing that hasn’t changed is our mission to collect and maintain a safe and adequate blood supply for the Greater Grand Forks community.