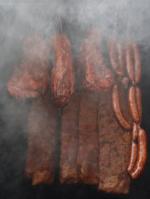 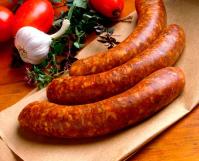 Born in a town of 1,000 people near Prague, Czechoslovakia Ladislav (Laddie) Novak started his journey to be a sausage maker and butcher at the age of 14. Laddie said "All the boys had to go to school for some kind of trade. The first year you attended class two days a week and one day a week the second year. The third year class attendance wasn't necessary as long as you ran your own business." Even though communism had not taken over yet, 20 years old was the magic age for all boys to join the army. The diploma only prepared the young men for their trade once military life ended.

In 1947, Laddie married Marie Mala. She lived in a small town near Prague. She had been born and raised in the small town of Hradistko. She also had been working in a meat market. Laddie was 23 years old in 1948 when the communist party took over. He and his wife escaped to Germany where they stayed in a refugee camp for six months. The next 16 months were spent in another refugee camp near Naples, Italy, call Bognoli. Laddie said, "There were 10,000 refugees in the camp. Many of us wondered if we would ever leave." The Novak's Daughter Iiona was born in Naples. When she was six months old, they received the notice that they had been accepted by the National Catholic Welfare Organization and a sponsor had been found to bring them to the United States. January 1950 found the Novaks leaving Naples to join the other 1,600 refugees on board the General McRae, an ocean vessel headed for New York. In New York they were fed and given $18.00 and a train ticket that had been provided by their American sponsor Tony Stang of Mayville, North Dakota. After a three and a half day journey by rail, Mayville, North Dakota was a reality.

Tony and his wife were very good to the Novaks. Tony owned a meat market and put Laddie to work immediately. He also found a two room apartment for them for $20.00 a month. The hours were long and the money wasn't great. He worked 60-70 hours a week for $35.00 weekly. Less then two years later Tony passed away and the Novaks made plans for their next move. They bought a 1937 Ford and left Mayville for Devils Lake, North Dakota. A salesman from Monteith Packing Plant had heard of a Czech butcher and sausage maker from Europe and offered him a job. Not only was he hired as a butcher, he was also buying cattle from farmers. Laddie took little time getting acquainted with his new job. The Novaks lived in Devils Lake for eight years. In 1959, they decided to move to Grand Forks, North Dakota where the opportunity was greater.


Years later, after being in business in four different locations, they bought a vacant gas station on State Mill Road, and renovated it into a meat processing plant. After the business started to grow, they decided to expand and another store was built at 2801 South Washington Street. In 2002 an addition was added to the south end store and the store on State Mill Road was closed. Sixteen People handle the daily business at L & M Meats, including two sons, Laddie Jr. and Jeff, who are both partners in the corporation. Building their business on honesty and a reputation for good products has been the reason for their success. Not only do they draw a large number of people from the area, many people remember Laddies's meats when they return for a visit. Lifelong family recipes have followed Laddie. They make many varieties of special sausages from family recipes that have people lined up at the counter every day. Such favorites as Bohemian Shorts and Polish Sausage go out the door by the ton every year.