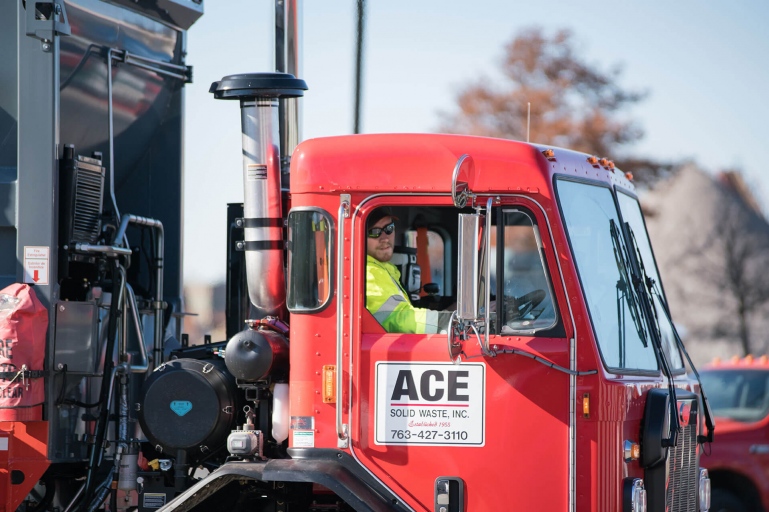 During Eisenhower's first term as President, the country was in pretty good shape, and a local boy, Don Hedtke, had just returned from the Korean War.
Hauling ashes (as it was called back then) became a career of choice. Don drove an old pick-up truck through the neighborhoods, knocking on doors and looking for full ash cans.

Two bits a barrel, cash, was the typical charge. Adams Disposal was his first employer, but soon he struck out on his own.

In 1955, ACE was born when Don, his brother, and a friend combined forces. they spent the next 37 years building a history of service.

In 1992, Andy and Tim Schweizer saw the value of ACE and purchased the company from Dean Warden and Bill Hedtke. Located in Andover, the company had 25 garbage trucks and 25,000 loyal customers in a growing community. Confident in themselves and their people, the brothers invested time and money in a service organization that is built to last. Today, based in Ramsey, with 60 trucks, and 85,000 customers, ACE continues to be the local neighborhood hauler.

Many books have been written on how to be successful in business. Strategic planning, beating the competition, and having the latest technology are all said to be keys to success. Each has its place, but in business and in life, values and vision guarantee lasting success. When it was time to join forces with other haulers, ACE did it. When driver safety needed improvement, ACE gave customers carts to reduce manual lifting. When the community asked for curbside recycling, ACE provided it. When technology improved, ACE was one of the first companies to offer two-sort recycling. In 2004, to increase convenience for our yard waste customers, ACE began offering organics collection carts. Now, single-sort recycling is being integrated using a wheeled container similar to your garbage cart. It will be the largest single monetary investment in ACE history.

The owner and the employees at ACE are committed to defining a company culture for ourselves and our customers. Our culture values service, honesty, and trust. We recognize our role in the community, both every day on the street (safety, service, professionalism) and through the years as part of the local economy (jobs, tax base, local charities).