Please call us for more information 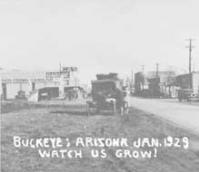 In 1877, the founder of the settlement that was to become the Town of Buckeye led a party of six men, three women, and ten children from Creston, Iowa, bound for Arizona. The leader of this party was Thomas Newt Clanton whose purpose for coming west was to retain his health. It was a good move for him; he lived in Arizona for 49 years before his death at the age of 82.

Development in the Buckeye Valley received its first great boost with the construction of the Buckeye Canal. In 1884, Malin M. Jackson named the canal in honor of his native state of Ohio, the Buckeye State. Clanton built ten miles of the canal, which was completed in 1886.

In 1887, Clanton and his family moved to Buckeye, becoming the first permanent Anglo residents. Clanton and Jackson envisioned a need for a town site near the center of the Buckeye Valley. In 1888, the two, along with William (Bucky) O'Neil, who was later to become known as a famous Rough Rider, laid out the town site on a portion of the Clanton homestead.

The first post office in the area was established the same year, with the postal station called Buckeye. Also in 1888, Bucky O'Neil and Associates organized the Buckeye Irrigation Company and had it certified by the Territorial Secretary. Jackson named the town Sidney, after his home in Ohio. However, because of the significance of the canal, over time the town became known as Buckeye, and the name was legally changed in 1910.

Advances in transportation put Buckeye on the map. In 1910, the Arizona Eastern Railroad came to Buckeye; in 1911, the first car; by 1912, a steam rail line connected with Phoenix; and by 1915, a state highway. The coming of the railroad was so significant that the business district was moved to accommodate the location of the railroad station.

As a result, Buckeye was booming. By 1912, major buildings were constructed, along with expansion of the business community. Buckeye was incorporated in 1926 and included 440 acres. The first mayor was Hugh M. Watson, who started the Buckeye Valley Bank. His son, Hugh Watson, Jr., served as mayor from 1956 to 1958.

In 1935, the Buckeye Chamber of Commerce started the Helzapoppin Days, which has become a local tradition. The festivities included street dances, a parade, a carnival and a rodeo. Proceeds were given to local churches that distributed the funds to the needy, and for scholarships. Celebrities such as cowboy singing star Gene Autry attended the events. Similar local holidays, such as the annual Pioneer Days, are still celebrated in Buckeye today.
Search Tags: housing, business improvement districts, business, house, businesses, housing grant, town of, village of, community service volunteer, buckeye pipeline, volunteer programs, volunteering, volunteer,