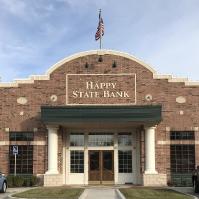 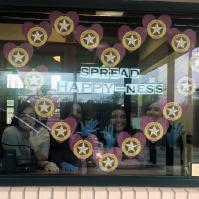 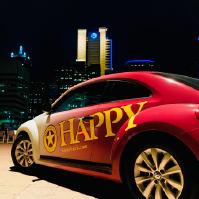 Founded in 1908 as First State Bank, Happy, Texas, the bank operated solely in that community during its first 81 years.  In 1990, J. Pat Hickman, Chairman, led a group of investors in forming Happy Bancshares, Inc. as they purchased the bank. The generically named First State Bank changed its name to the unforgettable HAPPY STATE BANK in 2004.

In 1990, the bank had six employees overseeing just over $10 million in total assets.  Out of the 880 banks in Texas, Happy ranked #812 in asset size.  Today the $3.8 billion bank operates 43 locations, including GoldStar Trust Company, in 32 communities with over 700 employees and is spread throughout the Texas Panhandle, South Plains and Dallas/Fort Worth Metroplex. Of the 475 banks operating in our state today, HAPPY STATE BANK is the 21st largest.

The bank has been recognized several times by Bauer Financial, Inc. for its capital strength, loan quality and profitability.  For six consecutive years (2014-2019) the bank has been named one of the Best Banks to Work For in the USA by the American Banker newspaper.  In 2015, the Independent Community Bankers Association noted that the bank was the 14th fastest growing community bank in the nation over a 20 year (1995-2015) period of time.

The bank has been recognized in several national and state-wide publications for its unique corporate culture.   The Happy Bank has won many awards and recognition (including from the United States Treasury Department) for financial literacy training via its “Kid’s Bank” program, now in 34 elementary schools.  It received the Torch Award from the Better Business Bureau for its outstanding ethical business standards.  And known as a top-notch corporate citizen, the bank has been named, through local newspaper polls, as the “BEST BANK” in several of the communities it serves.