Everyday 8am to 9pm 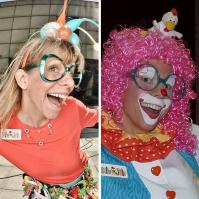 Looking for party entertainment? Silly Jilly can entertain your party guests for any length of time from a half hour to the whole party. About half her events (not including restaurants) are birthday parties for ages 1 to 8. Here are some scenarios for children’s birthday parties:

The birthday child feels special as I make him or her a giant balloon hat. Then kids and adults are amazed at watching me make my famous balloon animals for all the kids. I can do big and fancy balloon animals that take about three to four minutes to make, or if I just put two balloons in each sculpture, they will take one to two minutes to make.

Book Silly Jilly for a jam packed performance of balloon hats, a fun game, a magic and comedy show, and balloon animal guessing game. With balloon hats, your child is the star as party guests shout “bigger” as I add on more and more balloons to the birthday child’s hat. Plus I can make all the guests a colorful balloon hat. Then the kids will love cheering each other on in a game I call Silly Pass the Parcel. The most fun part of my birthday party performance is my fast paced audience participation magic show in which your little one is the star again. I combine magic tricks with a silly comedy twist that gets kids ages three to eight rolling with laughter. Then the balloon animal guessing game. As I finish up the balloons the kids will need another activity such as eating cake. The kids favorite part of my show is often, “When the toilet squirted you in the face.” Before I leave I ask who wants to look in my little toilet, and the kids who say, “I do,” think it is hilarious to be squirted.
For a party of about ten kids, this scenario will take about an hour and a half, and she'll be holding almost everyone's attention for at least two thirds of the time.

Another birthday party option is: a wild and crazy balloon hat for the birthday child only, Silly Pass the Parcel game, and my fun funny magic show will take forty five minutes for any number of kids.

Add face painting to one of the above options. It will take about three minutes per child.

My fee for St. Louis City and County is $120 for the first hour and $25 for each additional fifteen minutes. Most other metro area locations are just $10 more. If you want her in clown and she doesn't expect another clown gig that day (usually that means weekdays) she has an hour minimum. Call or e-mail to book and/or for pricing outside of the St. Louis metro area.