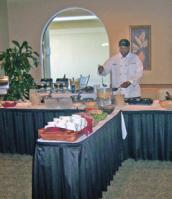 Southern Dunes G&CC is one of the best public golf courses in Orlando Florida and has been Ranked #6 in Golf Digests "Best Courses in the State". Southern Dunes is not only recognized as one of Orlando’s finest golf courses, but has been nationally ranked as well. Southern Dunes has been awarded a place in Golf Week's “Top 100 Modern Courses” from 1997 – 2000, a 4 ˝ Star ranking by Golf Digest and “Top 10 Courses Built In America 1987-1997” honors by Links Magazine.

In the 2008 November/December issue of Travel & Lesiure Derek Duncan & Steve Smyers described Southern Dunes. Southern Dunes, designed by Steve Smyers, opened a decade and a half ago on the site of an orange grove that was killed by frost in the mid-1980's. The soil was pure sand, of a distinctive orangish color. The land , says Smyers, "had some nice elevation change to it, and I thought we could do something pretty good there because it was going to be easy material to move around. We were able to stick the bulldozers off to the side and push and push and push to create mounds and hollows and ridges. Consequently, Southern Dunes bears a sculpted look. Sections of the course lie below the surrounding land, and there's a marvelous internal flow to the wide fairways that screams for golfers to play bump and run shots. Smyers carved some 180 bunkers-including ten at the par 3 Eleventh alone-to form a molten, bubbling surface that demands thoughtful navigation. written by Derek Duncan

If you are vacationing in Orlando and want to play golf, you cannot pass up the opportunity to play one of the best golf courses in Orlando, FL. This dramatic hillside layout stretches over 7,200 yards and features 100 feet of elevation changes which offers spectacular views of the expansive fairways that are flanked by over 180 bunkers. The topographical features include high grasses and ornamentals that form the borders for holes that tumble with the terrain. This spectacular design encourages golfers to use their imagination as the use of the slopes and contours can help maneuver the ball around the massive high-lipped bunkers and closer to the hole. Southern Dunes is well known for its large, fast and undulating greens that will test even the most seasoned of golfers. The distinctive look, imaginative design and impeccable playing surfaces of this Steve Smyers masterpiece has kept Southern Dunes consistently ranked among the nation's best.