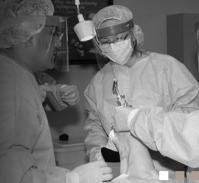 Although Dr. Jack Hughston founded Hughston Clinic in 1949 to practice general orthopaedics, he already had an abiding concern for athletes, especially student athletes and the damage sports injuries could have on their musculoskeletal system.

Through his private practice, Dr. Hughston’s pioneering work in the field that would eventually be called sports medicine began to draw national and international attention during the 1960s and 1970s. So impressed was the American Academy of Orthopaedic Surgeons with Dr. Hughston’s academic presentations and publications, his postgraduate courses, and his unique practice, the academy approached him regarding a pilot project to establish a resident training rotation in orthopaedic sports medicine. Dr. Jack Wickstrom, chairman of the Department of Orthopaedic Surgery at Tulane University School of Medicine, partnered with Dr. Hughston on the project, and the discipline of sports medicine, now a thriving worldwide industry, was born in Columbus, Georgia.

In 1968, Dr. Hughston established the Medical Center Orthopaedic Foundation as a funding mechanism to pay the stipends for Tulane University residents who completed a sports medicine rotation with him, although his private orthopaedic practice was the primary source of funding.

Despite this significant accomplishment, Dr. Hughston had bigger dreams.

In 1973, Dr. Hughston, his wife Sarah and his son Edgar incorporated The Hughston Sports Medicine Foundation (HSMF), a private, non-profit research and education foundation operating from the Hughston Clinic. In 1979, the practice was relocated to a 100 acre campus in north Columbus and soon after Dr. Hughston partnered with Dr. Thomas Frist, Sr., founder of Hospital Corporation of America (HCA), to build an orthopaedic specialty hospital on the campus. The hospital opened in 1984 and was immediately hailed as an international resource and referral center.

Completing Dr. Hughston’s vision, an official and independent home for the Foundation opened in the spring of 1985, built by Dr. Hughston and his now-numerous partners.

Although he passed away in 2004, Dr. Hughston had realized his dream to build a home for the finest non-university-based orthopaedic academic research and education center in the world. To honor Dr. Hughston and encompass the broader spectrum of orthopaedic projects beyond sports medicine in which the Foundation participated, the name was changed to the Hughston Foundation in 2005 and continues to operate as such to this day.

Before his death, plans were underway to build or acquire a hospital that could be dedicated to orthopaedics. In 2008, a Hughston Clinic partnership acquired Summit Hospital in Phenix City, Alabama, from Ameris Health Systems, LLC and renamed it Jack Hughston Memorial Hospital. Less than three years later, Jack Hughston Memorial Hospital was ranked best in the Columbus, Georgia-Alabama, region in patient outcomes for overall orthopaedic services by HealthGrades, the nation’s leading independent healthcare rating's organization. The hospital also received the HealthGrades 2010/2011 Outstanding Patient Experience Award™, ranking it among the top 5% of hospitals nationally for patient experience.