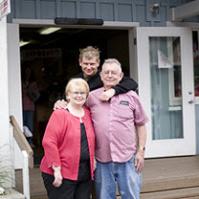 The Picnic Basket was conceived in 1985 by Wayne and Barbara Schwietert. They had no prior experience in business, but were able to apply the dedication and commitment learned in their prior trades as a forester and homemaker to turn The Picnic Basket into what it is today.

Wayne took on the task of managing merchandise and creating fresh fudge, while Barbara oversaw the staff. The business quickly grew, allowing the Schwieterts to acquire the floor space of two other shops over the next four years. They used these to add a gift shop to their offerings.

As their children grew, the shop became a family operation. Their kids, Kris, DiAnn and Kevin, worked all through their teens. It was their youngest son, Jeff, however, who kept up the family legacy long after the other children had moved on.