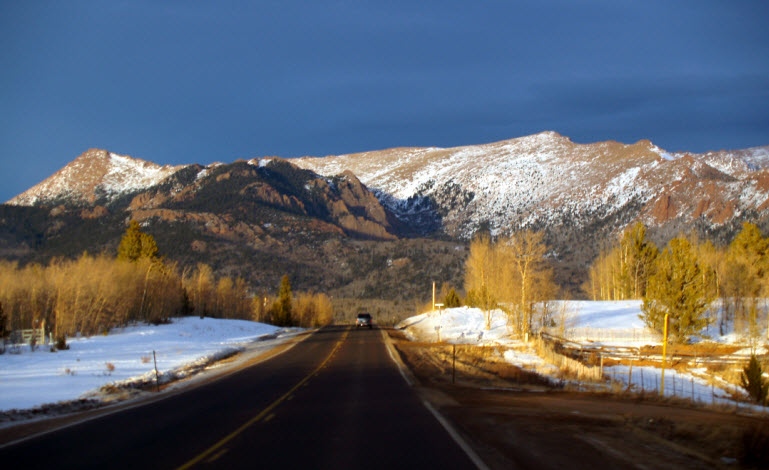 Woodland Park, originally called Manitou Park, was laid out along the Midland Railroad tracks and was quickly discovered by tuberculosis patients looking for a place to recover. The town became a popular spot for pleasure seekers and train passengers when the new Harvey House was opened in 1890. At that time there were 120 residents in Woodland Park.

During that same year, 1890, Teller County was changed forever by a cowboy and part-time prospect named Bob Womack. Bob owned a cattle ranch, bisected by a small stream known as Cripple Creek, on the remote south slope of Pikes Peak. It was here he discovered a rich vein of gold ore which changed the character of the entire Pikes Peak Region, and some say, the United States. At this time there were less than two dozen people living in the four-mile wide by six-mile long area that was known as the Cripple Creek Mining District. By 1900 more than 50,000 people lived in "the District."
Within a few short years there were 12 towns in the area ranging from the larger population centers of Cripple Creek and Victor to several other towns which grew up around mining centers. These were named Goldfield, Elkton, Altman, Independence, Anaconda, Gillette, Cameron, Beaver Park, Arequa and Lawrence. Goldfield and Gillette are the only two which remain.
The gold mining operations required a great deal of outside support and several areas came to the rescue. Woodland Park had 5 saw mills producing millions of feet of lumber per year, much of which was timber for the mines. 200,000 railroad ties were shipped out annually.
Divide was also an important lumber and supply town, but also became known for its high-quality, disease-free potatoes and for its fine crops of lettuce. Each fall, produce was crated and shipped to Cripple Creek and other locations around the United States. Ice to keep lettuce fresh while being transported was cut from ponds in and around the area.
No other town in the Pikes Peak region benefited from Cripple Creek mining like Colorado Springs. Stratton, Burns, Tutt and Penrose all made their fortunes in Cripple Creek and then made their homes in Colorado Springs. The Myron Stratton Home (named for Winfield Scott Stratton's father), the Broadmoor Hotel, built by Spencer Penrose, and many of the mansions in Colorado Springs' north end were all built with Cripple Creek gold.
Five reduction mills were constructed in Colorado City during the turn of the century and began processing the bulk of Cripple Creek ore. Colorado City offered water, coal and convenient rail access.
Tension escalated between Cripple Creek and Colorado Springs in the 1890's. Mine owners, miners and residents in "the District: grew tired of watching tax revenue from their mines go to Colorado Springs, which was (and is) the seat of government for El Paso County. They wanted a Courthouse closer to mining operations because of the number of county transactions that needed to be carried out. And so, after much arguing on both sides, the Colorado Legislature created Teller County, named for Senator Henry M. Teller, one of Colorado's first senators.