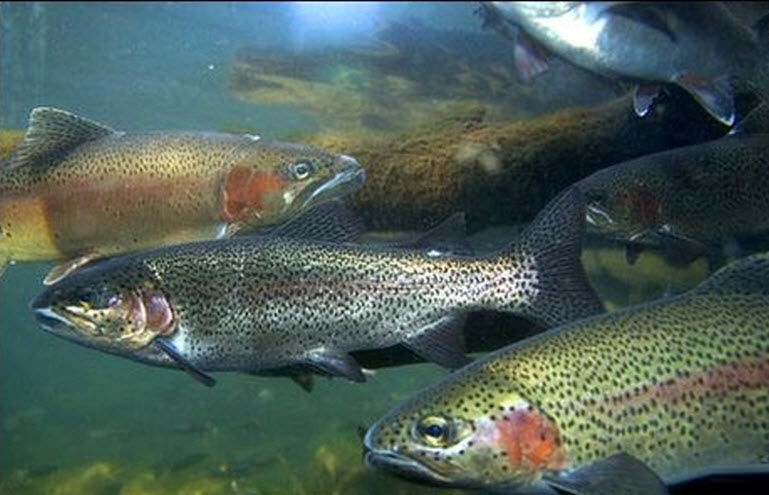 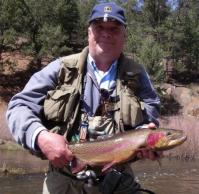 In the late 1700’s and early 1800’s the Ute Indians camped and hunted in the valley now known as Rainbow Falls Park. The Big Cold Spring was a source of water in the cold winter months, as it never freezes over, with a continuous temperature of 51 degrees. Evidence of their stay can still be seen in the limestone cave above the spring, with its black soot from many fires staining its ceiling.

In the 1820’s fur trappers began to enter the valley in search of beaver pelt. As the fashion in England for men was wearing large top hats made of beaver fur. In 1861, the first European settled in the valley now known as Rainbow Falls Park. This Frenchman was Bergen, a fur trapper who built a log cabin there and his name was given to the valley, Bergen’s Park.

In 1882 a man by the name of H. G. Thornton had purchased the land next to the Big Cold Spring to build a fish hatchery that would raise Rainbow Trout. The clear, cold spring water would prove to be perfect conditions for rearing fish. The creek running near by was named Trout Creek, because of the hatchery. The trout were a favorite on menus in the area, with General Palmer and Dr. Bell serving them in their restaurants in Colorado Springs and Manitou Park. A picture at the Ute Pass Historical Society from 1920 of Bergen’s Park (Rainbow Falls Park) shows the original cabin from 1861 and Dr. Bell’s Hatchery from 1871.
Some where around the early 1900’s the hatchery that Mr. Thornton owned and Dr. Bell created was eventually sold, and the next known owner according to the records was a man by the name of A. C. Hoxie. Mr. Hoxie’s wife who went by the name Roxie, took over the hatchery and continued to raise rainbow trout, just as her predecessors had. She ran the hatchery through the 1930’s and in 1946, when age and energy no longer allowed her to continue, she sold the Park to a wealthy business man from Denver named, Ralph Cotton and his partner G. H. Gannon for $2500. Cotton and Gannon visited the park with family and friends and continued the hatchery with hired hands. Then in 1953 a young and energetic couple by the name of Bob and Neva Watson with the help of their parents purchased the hatchery and named it Rainbow Falls Park.
and it was eventually, back in hands of Bob Watson. Bob made a go of it for a few years, but his age and the Park condition forced him to sell again. This time to Mr. Mike Herman, a man who would take good care of this important possession. The new owner took over the park in 2001 with the desire to continue the historical use as well as enhance the Park. The Hayman fire of 2002 temporarily stopped the progress and the Park remained open for groups and individual friends and family of the Herman’s.

In 2008 Mr. Herman decided to sell the park, to current owners Richard and Shawnna Johnson and Leland and Ruth Johnson, beginning a new adventure in the history of Rainbow Falls Park. Under the new name of Rainbow Falls Mountain Trout Inc., the new owners seek to preserve the rich history. By making improvements, adding modern facilities, and raising and stocking the lakes with trout. This beautiful valley calls to the person seeking adventure, fishing, and tranquility. Come enjoy the rich heritage of the old west. Come enjoy Rainbow Falls Park!